As soon as we made our way outside you could tell it was a different place.  The hot, humid air was immediately sticky on our skin, and the smell of exhaust from all the motor cars hung lightly on the air.  We had made it.  We grabbed our luggage, and stuffed it in the back of a truck, and made our way out to the Amazon River.  After a brief stop at the Belen Market, we headed out with all our baggage to a little village on the Amazon River.  The adventure had begun!  I will be recounting some of my favorite moments from the trip to Peru that I have just arrived back from today.  18 of us – 12 students and 6 adults – went to Peru for the past 2 weeks.  These are some of our stories…

On a jungle trek outside the village San Andreas

As we landed at the bridge of San Andreas, a small village of Bora Tribe people on the Amazon river, it began to clearly sink in:  this was the real deal.  This was going to be a rich and satisfying experience.  The wealth of what met my eyes felt like water to a parched throat.  I heard a pure, peaceful serenity that hung heavy with the sounds of the wild jungle – bird noises I had never heard; cicada bug; chickens, and the sound of children playing in the wild outdoors.  It was a small village, with houses that had thatched roof, and a few that had rusted tin.  We made our way to where we would pitch our tents and began to set up camp.

After not showering for 2 days, we were ready for a good clean bath of some sort.  I asked where the showers were and the woman in charge of the village looked at me like I was crazy for even asking and replied, “the river,” as if, duh, I was being silly.  So, for the first time in my life, I was going to “shower” in the Amazon River!  So I got the girls and the staff ladies together and asked if they wanted to join me…but where to go?  My American mind raced with objections and tried to come up with more “sanitary” options, but at the same time I was angry at that side of me and wanted to prove my inner wimp – that side of my comfortable, sterile selfishness that sometimes whines and groans –  that it was wrong and to shut up already!  And so the challenge was on!

As we were finishing getting our tents set up, a little village girl approached me with a small green parrot.  She smiled, and in her face I could see a young, mighty warrior.  Her eyes shone with a deep wildness that was kind and adventurous.  I smiled back and began to speak with her, using my highschool spanish skills that had laid dormant for years.  I felt drawn to her right away.  I introduced myself, and then asked her “su nombre?” (“your name?”).  And that was the start of a great friendship – Her name was Mierta, and the bird’s name was Loleta.  She gave it to me to hold, and I put my finger out, and Loleta climbed on board.  She laughed as I began talking to the bird, and I could feel my soul breathing deeply as her wild kindness warmed my heart.

As all us ladies got our “shower stuff” and began to head out to look for the perfect, private bathing spot, Mierta came out to greet us again.  One of our students spoke spanish, so I asked her to ask Mierta where the best place to bathe would be?  Mierta began to talk a lot, like any 9-year-old will do, and so I asked our student to see if she would take us with her and show us in person?  She quickly agreed, and off we went, following our new friend through her village.  She stopped along the way and picked something off a tree and opened it up – it was some awesome tasting fruit.  She gave us a handful of it, and talked away.  I asked my student what she was saying, and she was talking about how she caught her bird, Loleta, a few months ago in the jungle…like how cool is that??  Finally we arrived at what looked like a pond, but with plenty of privacy.  She said it was good for bathing, but we could smell feces.  So we asked her if there was another spot.  She quickly nodded and boldly led us to what would become our bathing area. 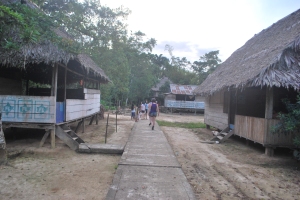 Walking to our bathing spot

We showed up to another clearing in the small tributary-creek that meandered through the village.  There were a few huts here and there, but as we inched down to the water, there was a nice clearing that had a pool-type area with a tiny current going through.  She walked right in the water and turned around as if to say, “C’mon! What are you waiting for?”  Once again that spark and wildness in her eyes was so beautiful and intense and alive.  So we looked at each other, and undressed as much as we dared, and stepped into the water.

The water was SO refreshing!  It was cool and a few of us were caught off-guard by the slope of the ground beneath the water’s surface as we slipped on the mud.    Screams of delight filled the air as we all found ourselves bathing like most of the world does: a bunch of women, some younger, some older, wearing our tanktops and shorts, with Mierta splashing us.  I had brought my bar soap and washclothe, and we all shared the soap, laughing, rinsing, and delighting in the refreshing feel of cool water on a hot humid day, and the result being clean skin.  In a moment we became one with the fact that we could bathe in the river – and that it actually was a lot of fun, not to mention bonding.  We named our bathing spot at that moment our “Amazon Spa – by Mierta”.  We dried off and sloshed back to camp in our damp shorts and tank-top, with Mierta laughing along-side us.  And a bit of her wild wonder, daring spirit, and kind fierceness had already rubbed off on us.  We felt like we had experienced a baptism from our spoiled, “blessed” lifestyle of “comfort” and had awakened to what it means to have community, and how necessity draws us all to be awakened to a true happiness that materialism could never afford.

I began to feel that inner calling reminding me of what it means to truly live.  In that moment of bathing, a kingdom moment occurred – a sort of baptism – a reminder that perhaps those who are wealthy in materialistic things, or those who have all the creature-comforts one could ask for – perhaps they, or should I say we, are the ones who are living in poverty?  And that our friends who are living out in the huts on the Amazon River and in other places around the world –  who survive off of the land and catch pets in the jungle and use a generator for electricity and who bathe in their natural Amazon Spa – those who understand that true fortune lies in community and love and taking care of each other no matter what – these are the ones who are truly wealthy!  This is the treasure we should invest in…

Mierta and I later on in the week

2 thoughts on “A Different Kind of Poverty – Part 1”