He stood against the wall, wearing jeans and a long-sleeve t-shirt.  A baseball cap covered his hair and hid his identity from most of the crowd.  He pulled out the prized possession from its case and began to fill the metro station with the sounds of beauty and magic – the sounds of music.

Joshua Bell, one of the most famous violinists, played for the next 43 minutes during morning rush hour in Washington D.C.’s Metro. 1,097 people rushed past during that time, with only a few stopping to listen for a moment.  The night before, Bell had played to a sold-out crowd where some of the seats went for $100 or more per person.

The few who stopped to listen?  Mostly children noticed the music right away and tried to pull on their mother’s hands to stop and listen, only to be yanked on in the mad rush of the morning’s schedule and routine.  A man, who was running ahead of schedule, noticed the music.  Not one who usually listens to classical pieces, but rather enjoys rock’ n’ roll, this was out of character for him.  When interviewed later as to why he stopped, he mentioned there was just something about the sound of the music.  It was peaceful.  He checked his watch, and noticing he was ahead of schedule by a few minutes, stopped and listened and soaked in the presence of peace.

Bell, who opened his violin case to take donations, only made $32.17  in 43 minutes – yes some gave pennies.  No one recognized who he was except for one woman who had seen him play before.  She stopped and stood, front row for her own private concert of one of the world’s greatest violinists, and took in each morsel of the moment.  She commented on the experience by saying, “It was the most astonishing thing I’ve ever seen in Washington.  Joshua Bell was standing there playing at rush hour, and people were not stopping, and not even looking, and some were flipping quarters at him! Quarters! I wouldn’t do that to anybody. I was thinking, Omigosh, what kind of a city do I live in that this could happen?”

Why was Joshua Bell even playing in the Metro?  Well, this was an experiment done by the Washington Post.  (You can read about the experiment HERE.)  The experiment was to see how many people would stop and listen and slow down.  There was a hidden camera in the Metro taking in the entire thing.  Check it out in this short 2-minute recapture of the experiment:

The music is all around us all the time.  Can you hear it? It comes in different ways.  Do we have time for beauty?  Are we aware of the Sacred that is dancing all around us, calling out to us, summoning us from our busy, hectic lives?  Are we annoyed when our schedules are interrupted?  Are our ears open to the call of the miraculous in the mundane?

Perhaps we would recognize the sound of the Sacred calling to us if we just slowed down, stopped, opened our ears and gave the world permission to speak into our routine.  Perhaps it’s time we put away our cellphones, our calendars, our ear plugs, just for a moment.  Perhaps it’s time we hush and be still.  Then we would be aware and know that God is present, right here, right now.  In this moment.  The music is playing all around us – do you hear it? 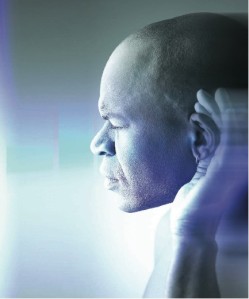