It was a beautiful day.  Sun out, birds singing.  It was the kind of day you feel free and there are 101 things to do, and they all seem possible. But then it happened.  I could see them coming from afar, agenda written all over their face.  Smiling on the outside, overly excited, but you know the cartoon dollar signs that appear in cartoon eyes?  That’s what I could see when they looked at me. 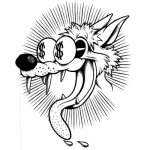 Like a moth being drawn to the flame, they came at me – assuming that I so desperately need what they have to offer.  Assuming that I am lost.  And so, there I was – whittled down to a number, an agenda, a goal to reach and push.  I was a box to put a check mark in.  And even though the sun was still shining, it was as if a small cloud appeared.

I’m sure you’ve experienced or seen the same thing.  People who are convicted that they need to push their ideas or views of “God” on others, and that’s the highlight of their existence. They can appear as people thrusting religious tracts into your hands, or holding signs claiming that “God” feels a certain way about other people’s sins, or maybe they’re yelling into a bullhorn informing everyone of coming doom or of a “hell” that should motivate us to make a change. It makes me sad and embarrassed.

And to vent for a moment, when have you ever seen people swarming to an angry religious person yelling into a bullhorn, telling everyone that they’re gonna die?  When have you ever seen people come to them and say, “tell me more!  This is so interesting! Wow, you’ve changed my life!” ?  And to be honest, when a tract is being pushed into my hands, I always wonder, “why doesn’t this person want to look me in the eye and have a conversation?  Does this person want to hear about my heart and how my day is?”  And then there are the signs saying horribly degrading things about “God’s” thoughts towards others…really?  That’s your best way to spread your opinion and try to get everyone to believe and follow your “God”?  Really??

I like this guy's approach to the other signs 🙂

Now don’t get me wrong.  I’m sure tracts have a place for some people.  And maybe bullhorns are good if you’re trying to get people’s attention in a large crowd at a certain event. And picketing with signs can be a good thing for some events, but when it comes to a concept of God and His love (or hate) and thoughts about people, it’s just so tacky and disgusting. The time and energy that is put into making tracts, or yelling at people, or making signs, I feel could be better spent in actually doing acts of love, justice, and compassion for others.  Or maybe listening to people with no agenda at all, except to just listen and hear a human soul.  Or maybe to really look into the eyes of another sacred human brother or sister, and just see them for the beautiful creation they are, right here, right now.  What if all the time that is spent in creating ways to push religion on others, would rather be spent in living a life of love to others and for others?  But to listen to someone, or see someone, or come alongside someone…well, that would take way too much time and energy – it’s much easier and much more safe and sterile to just hand someone a tract…

It’s crazy how people can believe in a Being called “GOD” and there are so many different ideas and versions about Who this Being is. I don’t believe in a God that is yelled about, or put on a sign, or confined to a tract.  The God I believe in cannot be caged.  The God I know has a nickname, and in case you haven’t heard it, it’s “LOVE.”  The God I know, loved hanging out with real, everyday people, and never treated any human soul as an agenda or a number or a box to put a check mark in.  The God I know went to hell already, so we don’t have to.  In fact, the God I know is with me and you and everyone else in the world (regardless of race, gender, social class, or religious beliefs) in every situation we find ourselves in – there’s nothing that can shock Him or offend Him.  The God I know is at the receiving end of slurs, hate crimes, and is NOT the one holding the signs condemning people, nor did He commission people to do so.  In fact, I believe the way we “take the name of the Lord in vain” (mentioned from the 10 commandments) is not necessarily saying OMG, but rather it is when we claim we know God, but then misrepresent His character of Love and screw His reputation to others, by doing things in the name of God that are not of God at all (don’t forget God’s nickname:  LOVE).

So put down the bullhorn and let acts of LOVE, JUSTICE, COMPASSIONATE ACTION, AND MERCY shout out from every pore of your being!  Instead of passing out religious tracts with mere words on them, become what James 1:27 speaks of when it says, “Pure and genuine religion in the sight of God the Father means caring for orphans and widows in their distress…” – take the time and investment to become more than mere words to someone.  Put down the hateful signs, and show true signs of love, justice, compassionate action and mercy to others. Perhaps what it comes down to, is that to believe in a God of LOVE is to let go of control.  Cuz when there are no agendas, when there are no ways to keep track of my righteousness weighed against other’s sins, when I let go of my control and just love and live in active compassion and just BE, that is a moment of the Divine.  That is when the mystery of God’s character can be glimpsed in the mundane of human imperfection!